Electromagnetic vibrating feeder is a kind of equipment for quantitative, uniform and continuous feeding of pellets or powders from storage silos and storage funnels. It is common equipment for automatic flow operation, according to its structure and installation. Features, can be divided into open, closed, hanging and benching four forms, with the following characteristics: First, can be manually and automatically adjusted according to actual production needs; Second, the device does not have rotating operating parts, so no need lubricating equipment, easy to operate, so production and maintenance is simpler than other feeders; third, in the process of conveying, the material does not slide on the surface of the tank, but jumps forward, reducing the gap between the material and the tank Friction, prolonging the service life of the tank; Fourth, the equipment consumes less electricity and has lower operating costs, but the disadvantage is that the operation noise during the production of the equipment is relatively large. 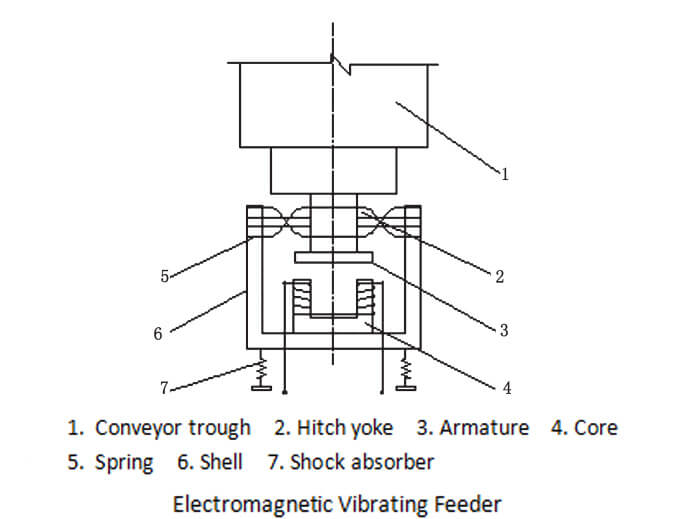 The single-phase alternating current forms a pulse current through a rectifier, and the pulse current supplies power to the electromagnetic vibrator coil winding. When the power is turned on, the power supply voltage is rectified and has a half-wave voltage in the positive half of the black line. The coil winding has a current passing through it, generating a pulse electromagnetic attraction between the iron core and the armature, and the transporting groove body moves backward under the action of the pulse electromagnetic attraction. At this time, the spring compresses and deforms to store a certain potential energy; while in the negative half of the black line, the rectifier is not energized, no current flows through the coil winding, the gravitational force disappears, the potential energy in the spring is released, the armature and the iron core are separated, and the transport tank moves forward. . And so on, the trough body has a certain frequency of AC power
Perform a reciprocating motion.

When installing the electromagnetic vibrating feeder, pay attention to the following items: First, the fastening screws between the conveyor body and the connecting fork should be tightened one by one, and the spring tightening screws must be re-tightened before installation. Second, the lifting rods are made of steel wire rope and hanger frame. To have sufficient rigidity, the boom should be vertical; third, the connecting device and the vibrating feeder should maintain a gap of 20 ~ 30mm; fourth, after the equipment is installed, ensure that the width direction of the trough is kept horizontal to prevent the material from being even. After the installation is completed, it will run continuously for 8 hours under no-load and rated voltage conditions. During this period, the running condition of the equipment should be stable. Check the air gap between the iron core and the armature to keep it within the range of 1.8 to 2.0 mm.

In order to ensure the normal operating life of the electromagnetic vibrating feeder, the following matters should be noted during the use: First, the equipment should start from the minimum potential and gradually increase until it reaches the rated value. Second, the inclination angle of the conveying trough should be controlled. Within 20 °; third, when the material is unloaded, a certain amount of material should be retained on the tank of the equipment to prevent the material from impacting the conveying tank; fourth, there should be no large current fluctuations, if unstable conditions occur Measures should be taken in a timely manner.
JXSC provide a full set of material feeder include vibrating feeder, electromagnetic vibrating feeder, plunge feeder, trough feeder, etc.