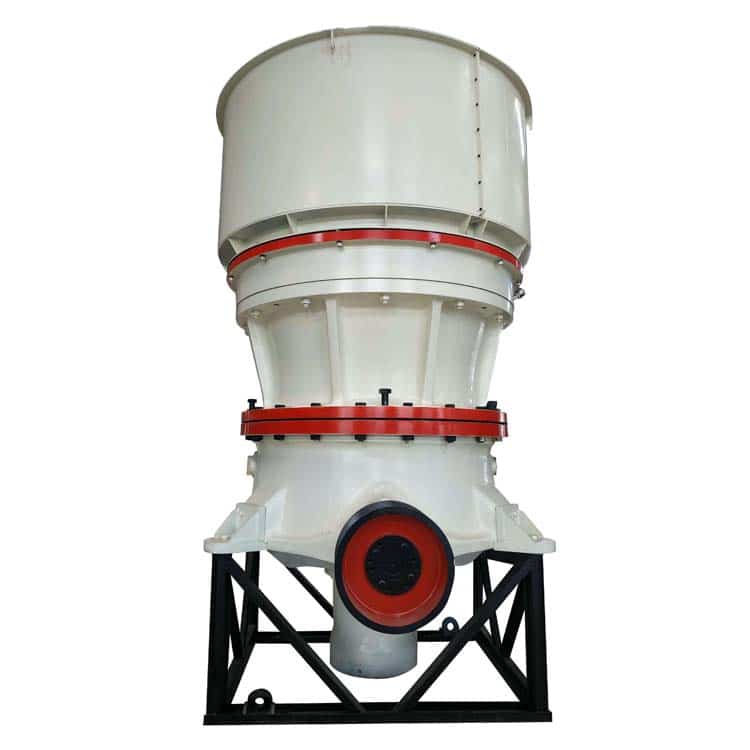 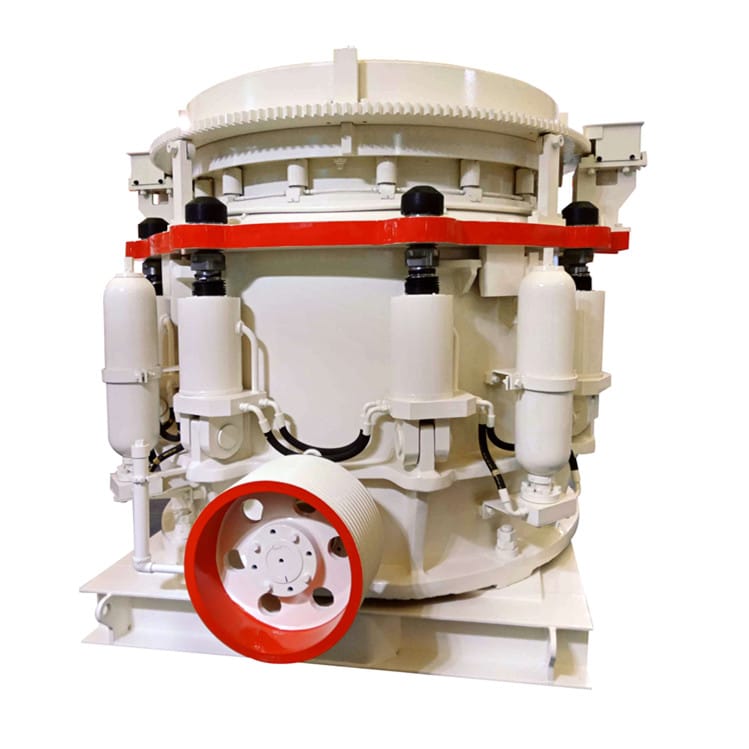 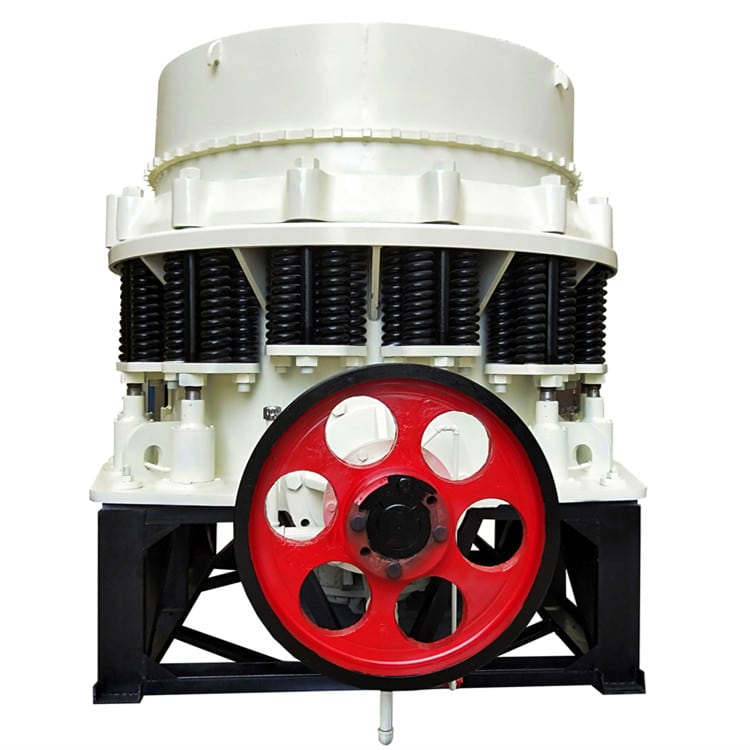 JXSC provides a high-quality rock crusher cone machine, like the brands of Mesto and Nordberg. We also have other series crushing machines, such as jaw crusher, impact crusher, hammer crushers and sand making machines.

The cone series crushers compress stone/rock mineral materials by squeezing force between the fixed shaft and moving shaft. Change the least gap between the two crushing shafts of the equipment can adjust the target particle size. When the wedge or eccentric rotator starts to work, compression comes into being within the cavity. As the rock materials move down, the chamber mouth becomes narrower, the material becomes smaller. The crushed materials discharge at the lowest of the machine once they through the chamber.

Cone crushing types of equipment are widely used in metal and non-metal mines, cement plants, sand and stone metallurgy and other industries. It is applicable to various ores and rocks with fine and fine Platt hardness ≤5~16, such as iron, granite, limestone, quartzite, etc. Its working principle is the same as that of the gyratory crusher, but stone crusher cone only for crushing medium or fine material. The uniformity of the discharge particle size of the medium and fine crushing operations is generally higher than that required for the coarse crushing operation. Therefore, there is must provides a parallel section at the lower part of the crushing chamber. At the same time, expediting the rotation speed so that the material is in the parallel zone and squeeze more. 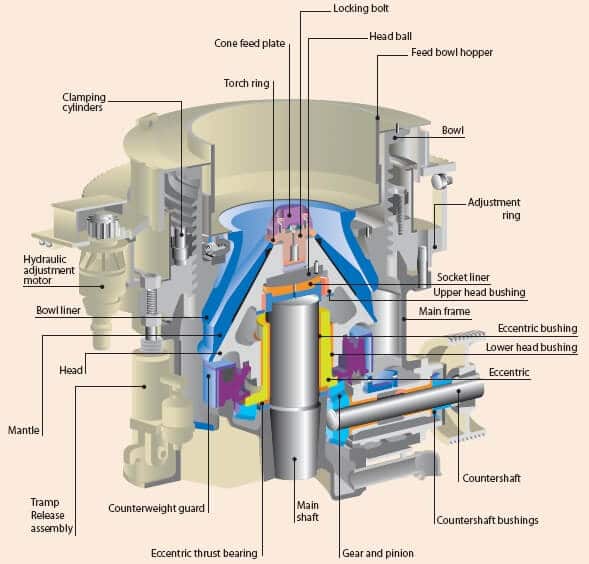 When the cone crusher is working, the rotation of the motor rotates by a belt pulley or a coupling. Some drive shaft and cone portion rotates under the urging of the eccentric sleeve. Therefore, the broken wall of the crushing cone is close to and sometimes leaves the surface of the rolling wall fixed on the adjusting sleeve. Then the ore is continuously subjected to impact, pressing and bending in the crushing chamber to realize the crushing of the ore. The motor drives the eccentric sleeve to rotate by the bevel gear, the crushing cone rotates. The crushing cone is close to and then leaves the fixed cone to complete the crushing and discharging. The joint between the support sleeve and the frame body is pressed by the spring. When the crusher falls into a non-breakable object such as a metal block. The spring is compressed and deformed to discharge foreign matter. Therefore achieving insurance and preventing damage to the machine.

The name of the single-cylinder cone crusher is because it is supported by a hydraulic cylinder at the bottom to support its crushing force. Due to the high rigidity of the hydraulic medium, the load force of the crusher can be well supported. At the same time, the protection effect is better in overload protection, and the crushing force can be made larger. Improving the power factor, reducing the equipment and foundation. Facility investment. The hydraulic cone crusher is also better than the springs.

The single-cylinder crushing machine's construction is relatively simple, and the feed size of the S-cavity cone crushers can be larger. The CC series single-cylinder cone crusher also has a relatively simple structure, easy to use and maintain. JXSC CC series single-cylinder crusher has been widely used in hydropower, nuclear power, highway, high-speed rail, stone, mining and non-metal mines, and has been fully recognized by users. Its performance is comparable to that of foreign mesto brands. Good equipment also needs good maintenance, so the machine needs to care. The working condition during the use process also determines the service life of the equipment. It is very important to always do the maintenance work on the equipment to ensure that the equipment works under normal working conditions. Due to the structure of the crushers, it should pay special attention to the problems of crowding the feed, the segregation of the feed, the drop of the feed, and the like. And minimizing the unnecessary impact to cause abnormal damage to the crushers. 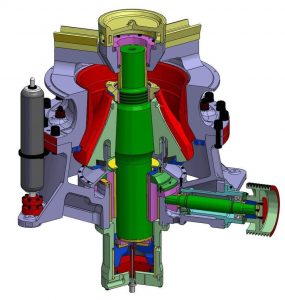 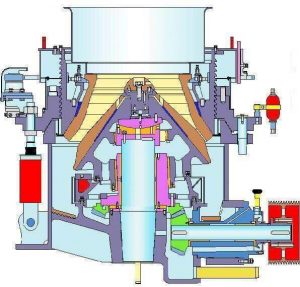 The following are the Nordberg hp series cone crushers, Sweden Sandvik's H-type hydraulic cone crushers, and the domestic y-spring cone crushers (roughly similar in appearance and internal structure to the cs spring cone breakers). Divides into standard type and short head type), the structure characteristic of these three kinds of cone crusher is compared.
(1) Fixed shaft comparison
The structure of the fixed shaft of PY type and HP type cone crusher is basically similar. But because the HP type cone crusher adopts the hydraulic cylinder method. The support sleeve is easy to disassemble, and the pad between the branches is available. The replacement of the thin copper plate, so the branch can be better protected. The fixed cone composition of the H-typer equipment is relatively simple, and the fixing and assembling of the fixed cone are also convenient and quick. But the disadvantage is that the gap between the connecting bolt and the bolt hole is small, and it is difficult to replace the bolt when the belt breaks.
(2) Moving shaft comparison
Compared with the HP type stone crusher cone, the PY cone crusher differs mainly in the spindle, that is, the former spindle is mounted on the moving cone, and the latter spindle is mounted on the base. The advantage of the HP-type cone crushing motorized cone is that the overall height is low and it is convenient to place during maintenance. The moving cone of the PY-type is affected by the spindle, and a special storage point with a trench is required for placement. In order to fix the moving cone, the H-type cone crusher adds a beam to the upper frame, which is easily affected by the beam to cause segregation of the feedstock and vibration.

If you want to buy China cone crushers or look for crushers machine price. Please send a message to us, our engineers will get back to you.