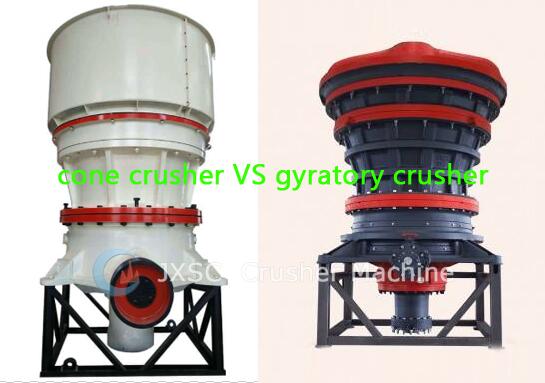 {Cone Crusher vs Gyratory Crusher}Both cone and gyratory crushers have a cone, and their outline that looks have a little resemblance. The two crushers can continuous working, and their working principle in the same way. But the cone crusher vs gyratory crusher, their structure and performances are different.

The cone liners of the gyratory crusher are steeply inclined. The movable cone that up part is small and lower structure is large, while the fixed cone in which the top is big and the bottom is small. Therefore, it can increase ore feeding capacity. The cone of cone crusher is gently inclined, and the movable cone and fixed cone are placed in the truncated cone. There is a certain length of parallel ore crushing zone between the two parts, which can better control the size of ore discharge. Under the action of the high rotating speed movable cone, the ore is guaranteed to be crushed at least once in the parallel zone. As a result, the product has a uniform particle size. 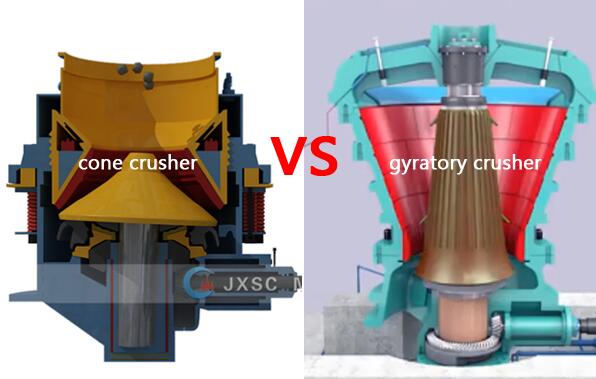 The discharge gate of the gyratory crusher is large, so the size of the small non-broken things such as hammer allowed through. There isn’t much required in its safety device. But the cone crusher must be equipped with a safety device, and the requirements of reliable work. A precompression spring safety device or a hydraulic safety device is usually used.

There is hardly any effect that the gyratory crusher because of the liner wore to make the discharging ore increases little. Therefore, it is usually used to adjust the size of the outlet by moving the cone up or down. Cone crushers require the uniform size of ore discharge, and the scope of increasing the size of ore discharge is very small because of the wear of the lining plate. Because the ore discharge opening is frequently adjusted, the adjusting device is required to be easy to operate. For example, a spring cone crusher can adjust the height of the fixed cone to change the size of the outlet. It should be noted that since the introduction of hydraulic adjustment and hydraulic insurance, the adjustment mode of the gyratory crusher and cone crusher is not very different. Jaw Crusher VS Gyratory Crusher

1. The rotating speed of the movable cone of the gyratory crusher is low, the stroke is small. And the ore is mainly crushed and broken and bent. The cone crusher has 2.5 times higher rotating speed and 4 times larger swinging angle than the gyratory crusher, so the ore is impacted quickly. Therefore, it is advantageous to the ore crushing, the crushing efficiency is high.

2. Different applications. In large quarries, gyratory crushers are often used as primary crushers. But the cone crusher is used as secondary and tertiary crushing more often and often used in sand plants and mines.

The cone crusher has the characteristics of high efficiency, high crushing ratio, low power consumption, and uniform product. So, since the end of the last century, it has been widely used in the world. And the crushers are constantly improvement and perfection on its itself structure. Cone crusher is suitable for medium and fine crushing of materials of various hardness.